As many of you know, we just finished our first Eastern Zone USA Working Equitation Championship.  It was held in Bulls Gap, Tennessee at the 3 Bulls Farm.  It was run by the Eastern Region Andalusian Horse Club.  I’m sure I am not alone in giving a big standing ovation to the crew that made it all happen!

The progressive barn party was kicked off by the Michigan crew demonstrating a line dance that went with their Wild West theme.  They brought along a great group of junior riders which was so great to see doing WE.   Great food was shared in all of the barns.  Even Bear Stew!  The WE cake made by Mindy Finelli (show secretary) for the competitors party, the first evening, was spectacular!

Among the competitors, it was really cool to see mothers and daughters competing and placing as well as a set of sisters riding full sister horses.  I wish I knew everyone’s stories.  But what I can tell you is that you could tell that all the riders worked hard to get to this show.

As shared by Stephanie Hayes, “It just doesn’t get any better than hanging out with the WE crowd from 10 different states, and even Canada, and all the fun people that came to volunteer.”  “The biggest take away for me (Stephanie) was the highest level of horsemanship and sportsmanship that was seen at this show – riders putting their horses first.  The second takeaway was how 43 competitors can bring so much food and festivities for the barn party!”

Because of the great sponsors, there was fantastic prize money awarded to the Champion and Reserve champions in all of the divisions, and also to the breed high score winners!  What a wonderful addition that was.  Another special award that was given was the Alece Ellis Memorial Trophy.  Per judge Doreen Atkinson, “This was awarded to Kerry Freeland who, like Alece, is kind, gracious, always has a smile and a truly good sport.”

CONGRATULATIONS to all of the award winners.  I’d love to mention you all individually here, but since I don’t have all of the placings, I’ll let their AO’s mention them.  I just don’t want to inadvertently leave anyone out.

What a thoroughly successful four days New England Working Equitation had at Equine Affaire in Massachusetts November 10-13.  Hundreds of people stopped by our booth to learn more about the sport.  It was so exciting to hear people say that they’ve heard about WE and wondered where they could find a clinic or asked where shows were going to be held. Last year at this event the majority of attendees had never heard about WE and saw it for the first time during the demo and clinics I presented. This year only a handful of people had never heard of it.  Riders of all disciplines and ages were seeking clinic opportunities and other ways to get involved.  NEWE is growing by leaps and bounds and our participation at Equine Affaire helped move the sport forward in New England and surrounding states. It was so much fun to see some familiar faces of other USAWE members from the region and beyond like TD Biddie Lowry and Nancy Wilochka who came all the way from VA! Thanks to all the

NEWE members who stopped by to visit, too.

NEWE has some great ideas in store for the off season of 2023 to keep members enthusiastic during the darker days of winter. Monthly Virtual Google Meets to continue education of WE and our popular Virtual WE Schooling series to get feedback and some training tips on your rides. Information on NEWE membership for 2023 will be sent out in December and we hope you’ll consider joining us for some great events, community and learning.

It was a lovely weekend at 3 Bulls Farm, full of even lovelier people, and some of the loveliest creatures at the USA Working Equitation Eastern Zone Championship Show!  We want to thank the world class Judges, our dedicated show staff, and our talented and fun loving competitors. We had a blast, we’ll see you next time.

Delta Zahniser competed with both Glory and Rayne in L1. Rayne finished 3rd and her sister Glory was 4th. It was Glory’s first show indoors. Martha Ryan and Annie were DQ’d in speed L2 for crossing the bull line, but greatly enjoyed a year of canter work. Martha said she’d never go to TN because it was too far to drive her trailer, but she conquered the task quite well and was glad she came. Lynn Maloney struggled with a lead in dressage and ended L2 in 3rd. She is definitely loving the speed adrenaline. Rose Watt and Santi were 2nd in L5. Santi turned 20 this year, and I am planning semi-retirement for this wonderful Andalusian stallion. Lynn and Rose traveled another 970 miles to Fort Worth TX for the National Andalusian show which included a WE show. Lynn was Reserve L2 and I was Reserve L5. Santi also won Western Pleasure and Trail at that event. It was a long 2 weeks on the road from PA to TN to TX and back. We met Brit Callahan and her new TX WE friends and had a great visit. 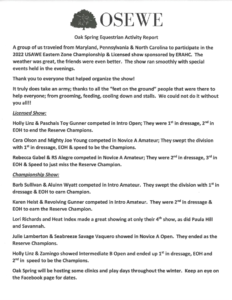